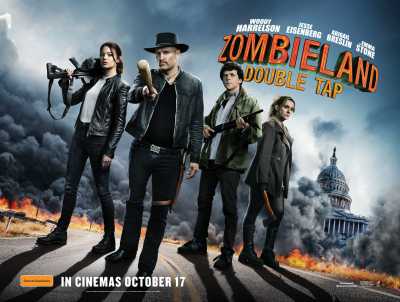 Where the original was funny and moving, this one’s barely funny and it barely moves

Putting aside the monstrous thirst for flesh, a zombie is essentially halfway between a living human and a rotting corpse, animated but staggering around without much grace, a desiccation disguised as a person.

Zombieland: Double Tap occupies a similar space in the world of sequels. As a decade-later follow-up to 2009’s irreverent horror-comedy Zombieland, it isn’t an entry in an active franchise. It’s more like an 1980s-style cheapie retread, disguised as a more respectable legacy sequel.

Given the endless (and mostly basic) references to both pop culture and the original Zombieland, it wouldn’t be out of character for Zombieland: Double Tap to lay out this sequel-as-zombie parallel itself. The script (by Dave Callaham,

Rhett Reese, and Paul Wernick) occasionally points out the film’s potential mustiness: Columbus (Jesse Eisenberg) narrates a direct thank-you to the audience upfront, acknowledging that viewers have “many choices in zombie entertainment.