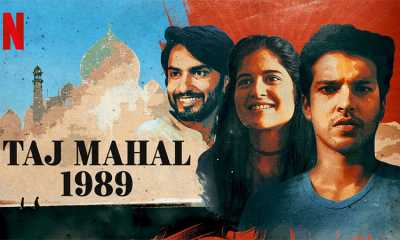 Set at a time when Karamchand was on cable and B-Tex was on the billboards, Taj Mahal 1989 is a quietly effective little series from Netflix, about themes as evergreen as the majestic monument it is named after.

Tinder didn’t exist back then, a character says, breaking the fourth wall. This is an exposition-delivery technique that creator Pushpendra Nath Misra deploys on multiple occasions early in the show, only to discard it later on, perhaps recognising that it didn’t quite fit in the first place.

In 1989, India was a simpler place, still a few years away from economic liberalisation, and Indians were a more tolerant people, more likely to accept the union of a Muslim man and a Hindu woman than they seem to be now. Back then, love wasn’t disposable, like a poorly taken digital photograph; it required patience, skill, and effort.

These are all virtues that Akhtar Baig, a professor of philosophy at Lucknow University, believes he has. But his marriage to Sarita, who teaches physics at the same school, is withering like the half nimbu inside the refrigerator of every middle-class Indian household.