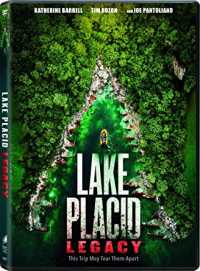 Adding to the franchise, ‘Lake Placid: Legacy’ is directed by Darrell Roodt and supported by a powerful performance of Kathrine Bell as Jade and Tim Rozon as Sam, the film gives you a chance to #LeapForth into a world where ‘Survival of the fittest’ moto is tested and returning home might not be an option but a necessity.

Legacy sends across a team of young explorers who are setting out on an adventure to unearth secrets of an abandoned area which has no trace on modern maps and is hidden behind electric fences.
During their exploration, they reach an unrestricted facility which has a horrific background; the island was once home to deadly predators. Before the explorers get a chance to get out of the hell hole, they’re trapped, and our hapless heroes get dragged into a battle for their lives, will they make it out alive?