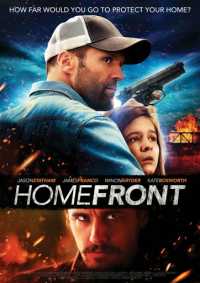 Jason Statham exercises great restraint in the opening minutes of “Homefront,” as his character, DEA agent Phil Broker, chooses to shoot an armed bad guy in the leg instead of blowing his brains out.

Really, though, who wants to see Jason Statham exercise restraint? Part of the fun — no, all of the fun — of a Jason Statham movie is winding him up and letting him go. The best of his action movies are ballets of brute force: primal, precise and punishing. “Homefront,” serviceably directed by television veteran Gary Fleder from a script by Sylvester Stallone (based on crime-novelist Chuck Logan’s book), isn’t Statham’s best — or most brutal — work, but it’s not bad.

The windup, in this case, comes after a winding down. Several months after that opening scene, Phil, a recent widower, has retired from police work, moving to small-town Louisiana with his young daughter, Maddy (Izabela Vidovic), to get away from it all.