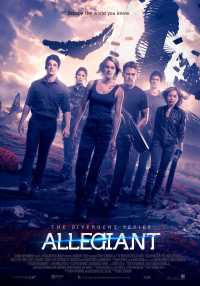 After dismantling the faction system and unseating Kate Winslet’s tyrannical Jeanine, Tris (Woodley) and Four (James) set out to discover what lies beyond the city’s walls. Meanwhile new leader Evelyn (Watts) is clamping down on the populace and publicly executing her opponents.

With a future society seemingly based around Cosmo personality quizzes (Shailene Woodley: mainly Cs) and made up of people with no surnames, Divergent didn’t begin with the most lucid of premises. Unhelpfully, follow-up Insurgent

muddied the narrative further with a secret box, a hidden message and the revelation that ‘Divergents’ are normal, after all. Instead of bringing much-needed clarity, Allegiant piles on yet more bamboozling mythology to flummox and confound.

Beyond the city walls, in a compound made of glass and white LEGO, lives the Bureau Of Genetic Welfare, overseen by Jeff Daniels’ smirking David. Ensconced in a tower (complete with double-helix staircase — subtlety, be damned!)

David watches over the social experiment in Chicago, trying to weed the genetically pure from the chromosomally challenged.