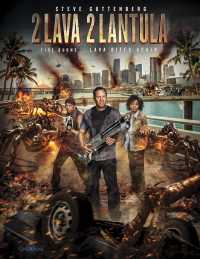 They’re creepy, they’re crawly, they’re hotter than ever, and they’re back! For the love of all cheesy, ungodly sequels, those volcanically-spawned arachnids are once again on the loose in southern Florida (who knew), and it’s up to the Police Academy graduates to put the squash on them once and for all!

Wait a minute, is this yet another sequel in the line of those screwball recruits, or is this a Sharknado clone in disguise? A little bit of both, for all those keeping score, and while it doesn’t possess the sheer magnitude of its Selachimorphic cinematic relative (Syfy relation, specifically)

it still manages to shove the laughs and goofiness down our throats. Now, whether or not you can retain the stuff in your stomachs is entirely up to you.

Steve Guttenberg returns as action star Colton West, who’s filming a buddy-cop movie with… who else? Michael Winslow reprising his role of Marty from the first film as well. When the distress call comes from West’s stepdaughter (Weaver) partying on the beach… hold on,

where the hell was she in the first movie? Anyway, those damned fire-antulas… or blaze-antulas… or whatever the hell they are come a’calling and lay waste to the beach they lay legs upon in a hurry, and it’s up to Colton and the fellas to spring into action and freeze up these killer insects

courtesy of Marty’s constructed liquid nitrogen pseudo-rifles (the best way I could describe them).